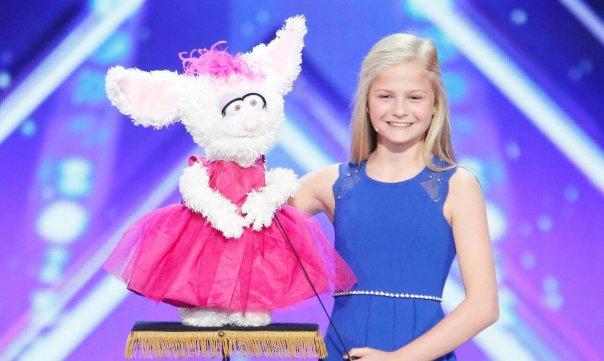 Well! Well! Well! Who doesn’t know about her! She is Darci Lyne- America’s Got Talent 2017 winner. This 12 years old ventriloquist from Oklahoma City took ventriloquism to another level as Heidi Klum said. She entered the show auditioning with her puppet, Petunia- the rabbit. Singing “Summertime” in her audition,she kicked away shyness and was straight sent to the live shows by Mel B’s golden buzzer. The way she delivered the performance was a spot on. In her second performance, she rocked on with her puppet, Oscar- the mouse whom she presented to have a crush on Mel B and got him singing, “Who’s Lovin you” for her. All four judges were on their feet even before the performance finished. In her third performance, the semifinals, she walked on to the stage with her naughty, old, lady puppet, Edna. Darci got Edna singing, “You make me feel Natural” for Simon Cowell. With her fantastic humor and a great singing art, Darci got the whole audience and the judges on their feet easily. Mel B was completely impressed once again.She said that the first moment Darci walked on to the stage, she was so memorized and she was sure that Darci could win AGT easily. Darci gave an outstanding final performance with her two puppets, Petunia and Oscar, who after having a hilarious fight ended up singing a duet, “With a little help from my friends”. She nailed it completely and all four judges predicted that Darci is going to win the show for sure. So it happened and Darci Lyne won it. Darci Lyne although 12 years old took ventriloquism to a whole new level after Terry Fator. Both were seen together before the results were announced. My heartiest congratulations to Darci Lyne. She deserved it completely.